Extreme weather, traffic jams, limited parking and large crowds are just some of the many variables that can come into play when heading out to an event. Ideally, it’s good to get there 15-30 minutes early. If it’s a major event, you may even have to show up a few hours ahead of time. 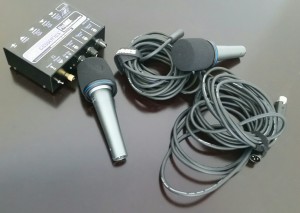 Always have a bottle of water, a granola bar and a fully-charged cell phone; you may be at the scene much longer than anticipated. Extra clothing (if possible) is a good idea, too, and not just because of the weather. I had the misfortune of standing too close to a drunk person at one particular sporting event. He vomited, and my pants got sprayed. Yuck! Years ago, I also learned partway through a live radio interview that the candidate I was interviewing on election night was drunk. Always expect the unexpected.

There’s often a media check-in table. Many times you’ll need to go through security lines, especially if you’re going to court or a major political event. Sometimes you need to walk farther than expected. You may find yourself having to actually run (not fun in heels)! This can happen when trying to catch a politician trying to slip past the media, or when you’re in a tense, potentially violent situation.​

Getting set up, while also staying out the way of other reporters and camera crews, can be a delicate dance. There are often cramped spaces where you’re trying not to trip over cords and stay out of TV reporter’s live shots. I was at a recent event where the media riser was in front of a camera connected to two large screens in front (unbeknownst to me). It wasn’t until a few people started to yell at me to move that I realized I was live on the two screens, blowing my nose for a crowd of a few hundred to see! Pay attention to your surroundings.

Making sure your recording device is ready to go is often a quick process, but don’t count on it. For example, there are often limited outlets available if there’s a “mult box” set-up. That’s where everyone plugs into a box that provides a direct microphone feed. You might discover a buzz or hiss during mic check. It could be a problem with your device or cord, or a problem every media outlet’s having. Sometimes the entire mult box is set to “line level” but you need “mic level.” You may need to grab a sound engineer or ask a friendly TV cameraman to lend you an audio splitter. There’s nothing worse than getting to an event just in time, only to realize there are molt box issues. As an alternative, you may have to put your recording device (in my case, an iPhone) up on a podium.  Having the event’s speaker put his or her script or papers on top of your phone is not unheard of. What you’re left with is muffled sound. Having to hold your device up to an audio speaker (or the actual speaker) is an option too, but not ideal in terms of audio quality and your physical comfort.

If there’s no mult box, you have to either set your microphone up on a podium, table or what’s known as a mic rake. You’ll need to make sure your cord is long enough to reach where you’ll be sitting or standing.

You’ll often hear TV cameramen say “down in front” at the start of an event. Sometimes, as an audio reporter, you’ll have to crouch down. Sometimes your hand will get stepped on. Sometimes your arm will start to shake from having to hold it up for a long time. You may have to decide between staying at the main speaking event and ducking out to get a comment from someone else.

Always record plenty of natural (or “nat”) sound, no matter what kind of event you’re covering. Let your recording device run for at least a minute to get ambient sound. It can add depth, perspective and life to a story.

And don’t forget to expect the unexpected.