I had the great fortune to be part of James Cridland‘s panel, “Mobile Apps: Hearing from the Listener,” at the Radiodays Europe convention earlier this month. To summarize the panel’s focus, listeners are becoming more used to the ideas of customization and personalization. The challenge for radio, as Cridland put it, is how it can catch up. 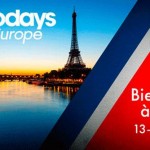 For my part, I talked about retaining audience and the value of metrics to learn about what makes for effective content. The panel was a quick 50 minutes in the middle of a stacked three-day agenda. Here’s some of what I learned, heard and saw while walking the floor and bouncing from room to room.

Radiodays is definitely a content-focused convention. Because so many international radio stations are government-owned/public radio, the usual topics of making money and marketing weren’t as much in the forefront. There was much more of a focus on enhancing and experimenting with content.

Lessons learned by American radio at the dawn of the digital era
Michael Harrison (Publisher, Talkers) asked the room how many people had a radio on them. No surprise: No show of hands. He went on to say that radio needs to do things to be more vital, cutting edge, etc. What surprised me was that no one held up their phone to say that could be a radio.

What caught my eye? – Next Gen
Millennial attendees were asked to talk about how they perceive radio. They almost unanimously said including podcast clips in traditional broadcasts would make radio more appealing to them.

Year of the Podcast
Dean Capello from WNYC talked at length about podcasting as a business. He talked about the value of research/metrics, and said good content takes time to develop. The panel was very well-attended. Radio seems to be scrambling to “figure out” podcasting strategy.

Movies in your head
Kaitlin Prest, host of “The Heart” podcast (it’s a sex podcast with incredibly high production values), talked for an hour about evolving her show from a vanity project into a revenue stream. She was a frustrated broadcaster who needed an audio outlet for her work.

In-car Radio – a dashboard disaster?
Fred Jacobs has pretty much become the de facto guy on the topic of radio and the fight for the dashboard. He’s also a fantastic presenter. He talked about the challenges Google vs. Apple present for app developers and radio (“Apple and Google are pushing radio even further down the dashboard”). In the same panel, Michael Hill from the U.K. said radio completely fails at using metadata in their content, which the car companies need.

30 Ideas in 45 Minutes
Author/radio consultant Valerie Geller was one of the panelists. She talked about radio content basics (“remember your listeners;” “don’t be boring”).

A German panelist talked about an effective Facebook promo his station ran. In essence, they posted a “win a car” giveaway on Facebook and encouraged listeners to comment on the post. If no comment was posted within two minutes of the previous one, the last commenter won the car. Sounds like a contest rules nightmare, but I was intrigued.

Miscellaneous
A few people said podcasting is the opportunity for radio (not time-shifted content, but original content).

The BBC announced it’s working with record companies in the UK to make the 50K songs played on BBC stations available for online listening.

Podcast demographics frequently quoted at the convention estimate podcast listenership on the low end of 18-34.

There wasn’t much talk about data and measurement, which I found totally strange. Might be because of the way stations are owned in Europe; perhaps it just doesn’t matter as much there.