How did I do that? Anatomy of a story’s creation

I recently published a piece about why the tech industry favors female names/voices in modern technology. To help you understand what’s involved with building content like this, I’ve broken down every step, from concept to publication. Before I get into that stuff, give the story a listen:

The finished piece is 7 minutes and 25 seconds. Start-to-finish, it took close to a month to put together:

“More” is the only option when it comes to researching a topic. Even if some of the articles you read survive only as background references in your head and never make it to production, it’s better to have that knowledge than not.

I thought about potential topics within the context of the piece, as well as ones that could add good sound to the story. For this, I thought up my own examples and discussed others with my colleagues.

While many of these didn’t make the final production, they still helped me decide which direction I wanted to take the overall piece in. More importantly, they painted a clear picture of the overall story, not just the one I wanted to tell. “Men often attributed to Space,” for example, could be another piece entirely.

Next, I investigated the topic further — looking at other pieces about why female voices appear in technology, and running down information about women’s place in the tech industry. A lot of what I read overlapped, but there were bits that didn’t (which is why it’s so important to gather as much information as possible).

In my original drafts, I included figures, stories, and myths from these articles, but realized I was straying from the topic. While they added nice supplementary information, I ultimately cut them to save time and stay on track.

Here are some of the sources I looked at:

Why are computer voices female?

Women underappreciated in the Tech industry

Stats on women in Tech are getting worse

Women in Tech: The numbers don’t add up

While learning about the topic, I researched potential interview subjects. I reached out to all of the organizations/people in the list below, but only one responded (just another example of why more is better).

I also tried to get an interview with Spike Jonze (director of “Her”), and after 2 phone calls, 2 emails, and a back-and-forth with his assistant, he ultimately passed on the interview.

I then needed to write interview questions for whom I’d be interviewing. In this case, it was Elizabeth Glenewinkle from Gravity Tank. While Gravity Tank is a Chicago company, she works out of its San Francisco office. For the sake of clarity, I asked we do the interview over Skype so the sound quality would be better than over the phone.

Because her expertise is in technological brand development, I aimed my questions to get the “insider’s scoop.” I really wanted to get the science behind the tech industry’s norm for using a female voice.

In an interview, always start with an interviewee’s name and title. This prevents any mispronunciations, and provides the most up-to-date record of their title for where they work. Websites aren’t always reliable because they may not be current.

It’s important to think of how you’d like to direct the piece before any interviews. It’s good practice to end with a “looking ahead” moment. This way, the listener doesn’t feel like they wasted time listening if there’s no payoff at the end. This is where my second-to-last question comes in.

An interview I did with writer David Hammond was different. Because he and I are friends, and I knew what his role in the piece would be, I didn’t write any questions down. I knew I needed him to talk about “Tracy,” the smart grill, so my first question was, “Tell me about this grill.” The other questions I asked were specifically about things he had said when talking about the grill.

Section 3: Editing Interviews / Writing the Script / Production of the Piece

The order of editing/writing/production is critical.

The first thing I did was go back to the interviews I’d conducted to pinpoint the best parts. These are the moments where the interviewees make precise points that are on subject, have a good beginning and end (so it doesn’t sound like they’re starting or being cut off mid sentence), and are generally under a minute long. Personally, I don’t like straight interviews because there’s a lot of unnecessary content. People tend to go off on lengthy tangents that have nothing to do with the topic at hand, which I feel weakens the point of the piece. By identifying the best parts, you’ll have only the most interesting and precise moments — if they say more information in a less precise manner, simply paraphrase what they say. There’s no need to waste a listener’s time. I discuss paraphrasing further in the “Writing” portion of this section.

At the end of it all, it’s shocking how little of an interview is actually used. For instance, here’s my interview with David Hammond: 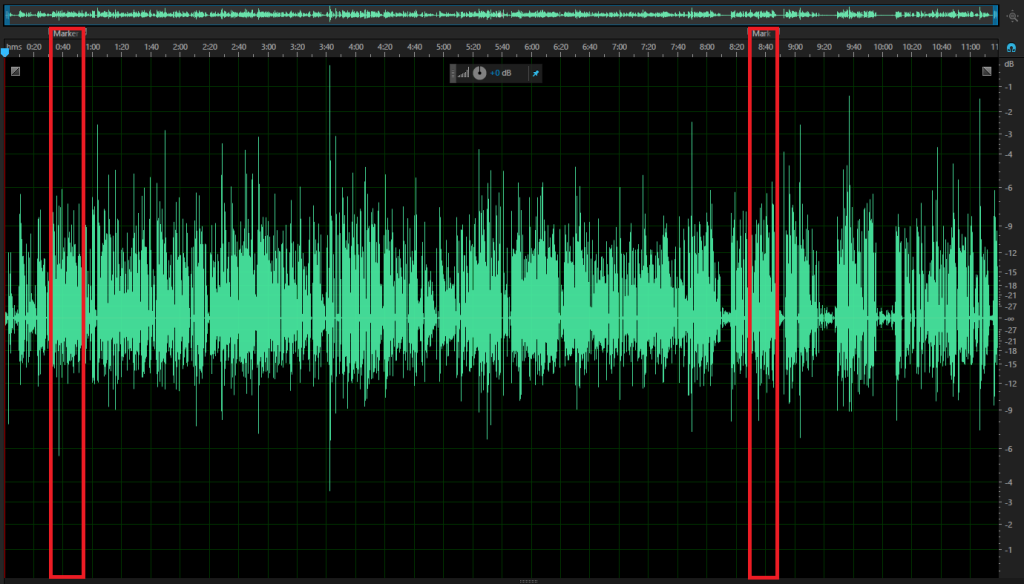 Of the 11 minutes and 19 seconds we spoke, I only used about 40 seconds worth (the sections in red).

The same goes for my conversation with Elizabeth Glenewinkle: 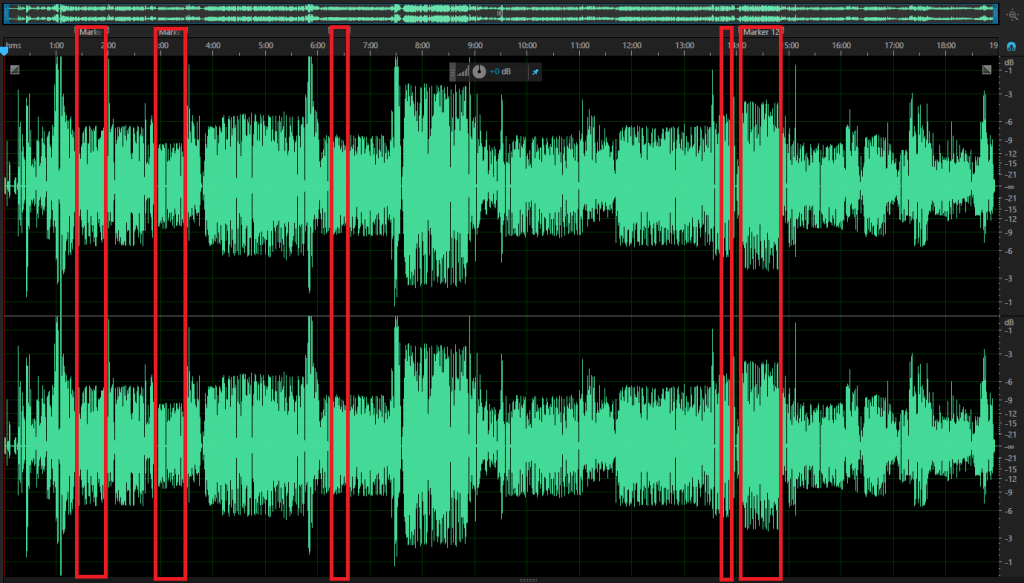 Of the 19 minutes that we spoke, I only used about 2 minutes and 20 seconds worth (again, in red).

At first, I pulled more than 5 sections from the Glenewinkle interview to use, but as the piece evolved, I realized they only added clutter and weren’t necessary. Essentially, difficult decisions need to be made when deciding what to use and what not to use. For this, less is more. External information doesn’t further the narrative.

(Side note, As you can see, Skype can be funny sometimes and fluctuate the volume of the person you’re speaking with. This was something I adjusted in the multi-track editor when putting the piece together.)

After identifying the best moments from each interview, I got to writing. I knew I wanted to begin with a montage, which would then lead into David Hammond, but the difficult part was how to organize Glenewinkle’s parts.

I wrote the individual sections with the Glenewinkle audio clips, then organized them in a way that made sense. After my editor looked over the script, we took a few of the sections out and organized them more cohesively. The piece’s flow is as follows:

Keep in mind a good portion of what I say is paraphrased from something my interview subjects say in our interview. By not playing what they say in full, the piece is more coherent.

As an example, there was a moment when Glenewinkle said:

“Oh yeah absolutely. I mean, every time you see uhh… a new one come out there will be an article in Wir… you know… CNN… or Wired or something about that…” (9.9 seconds)

Which I converted to:

“Glenewinkel says that every time a new tech voice comes out that’s a woman, there are articles written about how sexist that norm in the industry is.” (9.1 seconds)

I made it so the “one” (a new tech voice) and “that” (sexist norm)  in her quote are clear and also removed the unnecessary mentions of CNN and Wired — especially if they’re not being cited. And I made the change without adding more time to the piece. However, even if my changes would have added 10 more seconds to the piece, clarity is more important than brevity.

Producing the piece is like putting together the pieces of a puzzle. Everything’s laid out in the script, which acts as the picture on the front of the box, and all you need to do is put the audio pieces together.

I recorded my narration track, then built the piece from the beginning to the end, adding in the music as a final touch. Here’s what it looks like in the multi-track: 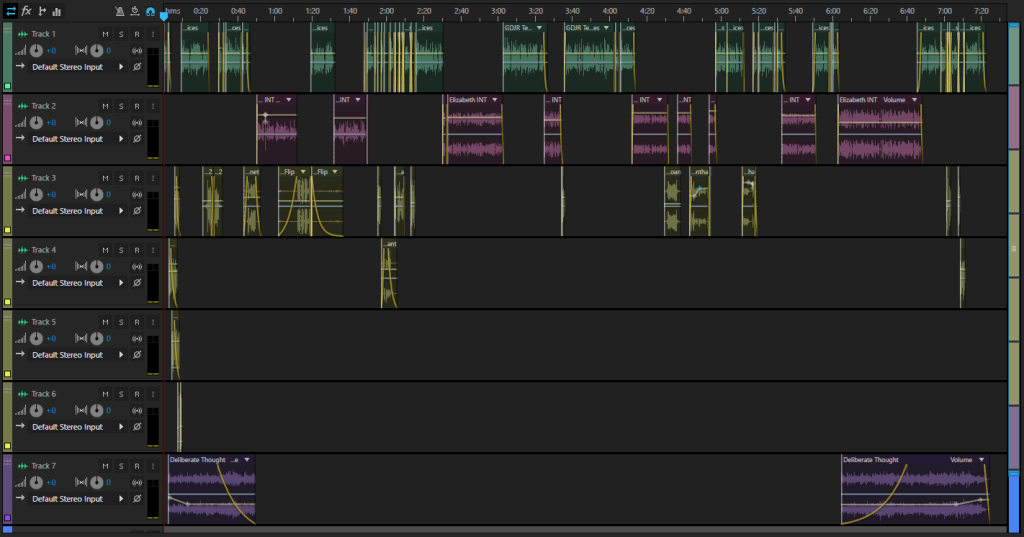 Track 1 (green) is my narration. Track 2 (Pink) includes the segments of my interviews with Hammond and Glenewinkle. Tracks 3-6 (yellow) are my additional sounds (Siri, Alexa, Hal, “Her” clips, etc.). And Track 7 (purple) is my music bed.

I only did two versions of the produced piece. The first got approval from my editor, but in the second I added the short clip in the very middle of Track 3 as an additional touch.

(Side note: It helps paint the picture if you listen to the piece as you look at this screen shot.)

Section 4: After the Fact

I didn’t spend every second from July 8 to August 3 working on this piece, as I have other responsibilities. But I think it’s safe to say I easily spent over 20 hours on it total. From researching to recording and interviewing to writing — this isn’t a short process. Now that all is said and done, I know I have a tight, coherent, and enjoyable piece that I’m proud to have spent so long working on.