Which Rivet newsroom story got shared the most in September, and what was the secret to its success? 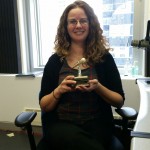 Rivet’s most-visited story (as determined by Google Analytics’ unique pageviews) for September was a story that was produced by reporter Jennifer O’Neill (with an assist from Rivet intern Qudsiya):

Jennifer’s piece was recorded for Rivet’s Chicago listenership. The fact that it pushed ahead of other national and international content means it had a concentrated blast of social support coming from the Chicago area.

Most notably, the people she interviewed for her piece gave it a fair amount of social media love (as seen here).

What are you doing to get your content out there? What’s working for you? What isn’t? I’d love to hear from you! Email me at james.vanosdol@rivetnewsradio.com.