When it’s time to make changes to your podcast

I started a podcast in May 2014 called Car Con Carne: The World’s Only Barbecue Podcast Recorded in a Car. The show’s title served as the elevator pitch: It’s a podcast recorded in my car outside barbecue restaurants. Yes, it’s ridiculous, but I believe podcasts should have a distinct position. 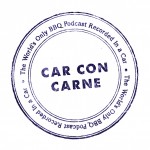 The podcast started as a joint venture with my friend Mike. We’d worked together at a couple of now-defunct Chicago radio stations (Q101, WZZN), and have been friends ever since. The unofficial distribution of show responsibilities had me handling guest booking, show prep, and social and web updates. Mike took care of all the audio concerns: Editing, production and gear. It was an arrangement that worked beautifully; I can edit audio well enough, but I’m certainly not fast. He does that sort of stuff in his sleep. (Not really. That would be weird.)

Just recently, Mike told me his wife got a job offer in New York and he’d have to leave the show. Since the show was a joint effort up until that point, I was left to consider whether it should continue; and if so, how?

I was faced with an existential question every podcaster faces: Should I continue to produce the show, especially with no immediate promise of compensation or reward? In my case, I quickly answered “yes,” but wanted to be thoughtful about what the next steps were.

I looked at the situation as a chance to rebrand and rebuild the show. Car Con Carne has no sacred cows (and if it did, they’d likely be smoked for 10-12 hours). The bottom line (one many podcasters can relate to) is that when your audience is small, it’s okay to take chances, chase ideas and keep an open mind.  Keep stretching out until you find your place.

My first podcast change was to run without a formal co-host. For the time being, each episode of Car Con Carne will run with a guest host. My recruitment efforts will be based on three simple criteria:

Of the three points, only one has a legit business purpose. The other two are directly related to comfort. Because let’s face it, if you’re not comfortable with your show and enjoy doing it, you shouldn’t be trying to build a business around it.

The second change was I had to take over audio production. We recorded Mike’s “farewell show” last week, and I spent Sunday night playing with a handful of audio editors, trying to land on the best approach. Here’s what I decided:

I should mention Mike donated his recording apparatus to me to ensure the future of Car Con Carne. I would’ve been dead in the water had he not.

I’ve also made the decision to open up the scope of exactly what I’m eating in my car. I love barbecue. Love. It. Like, can’t get enough. But the simple fact is until I’m getting paid to do the podcast, I can’t drive to far-flung locations just to eat it. Realistically, the list of barbecue restaurants that are driveable from my house will eventually run out. So, informally, I’ve transitioned Car Con Carne to “The World’s Only Food Podcast Recorded in a Car.” Mike and I flirted with the idea for a while, but now seemed like a great time to make it official. Again, no sacred cows.

Moving forward, I plan to include more listener participation (and by “more,” I mean “some”). One of Mike’s best, unused ideas was to incorporate bite-sized restaurant reviews (“Car Con Carnitas”). The original idea was to have the two of us record Car Con Carnitas independently and fold them into the longform episodes. We never got around to doing our own Car Con Carnitas, but now I’m hoping to include one per show. And they won’t come from me; they’ll be crowdsourced from the audience (and perhaps I can talk Mike into sending some from New York).

Finally, I decided to get a new logo. I quickly found a vendor on Fiverr whose work matched my vision. Five bucks and 36 hours later, this was waiting in my Gmail: 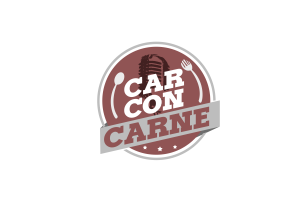 I wasn’t sure about the fork and spoon at first, but then I realized they make the logo look like a steering wheel. Cool. Subtle.

Change doesn’t need to be stressful or scary. It can be exciting and creatively fulfilling. Until your podcast hits “Serial” level, consider the “no sacred cows” mantra.